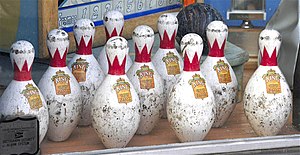 Duckpin bowling
From Wikipedia, the free encyclopedia
Duckpins are shorter and squatter than the pins used in 10-pin bowling.

Duckpin bowling is a variation of 10-pin bowling. The balls used in duckpin bowling are 4-3/4 in (12 cm) to 5 in (12.7 cm) in diameter (which is slightly larger than a softball), weigh 3 lb 6 oz (1.5 kg) to 3 lb 12 oz (1.7 kg) each, and lack finger holes. They are thus significantly smaller than those used in ten-pin bowling but are slightly larger and heavier than those used in candlepin bowling. The pins, while arranged in a triangular fashion identical to that used in ten-pin bowling, are shorter, smaller, and lighter than their ten-pin equivalents which makes it more difficult to achieve a strike. For this reason (and similar to candlepin bowling), the bowler is allowed three rolls per frame (as opposed to the standard two rolls per frame in ten-pin bowling).

Duckpin bowling centers are located in Connecticut, Massachusetts (principally in and near its South Coast communities), Rhode Island, Indiana (Fountain Square), Maryland (especially in the Baltimore area), Wisconsin, Virginia, Ohio, and in suburban Washington, D.C.. There is also one located in Potter, Nebraska, the only one of its kind west of the Mississippi.

In the state of Maine, in the historical renovation of Fort McKinley on Great Diamond Island, Portland there is a private two lane Duck Pin Bowling alley. It is located within the Recreation Center of the Diamond Cove Community Home Owners Association. Use is restricted to members of the community, guests of home owners, renters of the community condominiums and registered guests of The Inn at Diamond Cove.[1][2]

Duckpin bowling has rules similar to ten-pin bowling. In a 10-frame game, bowlers try to knock down pins in the fewest rolls per frame. Bowlers have three balls per frame, instead of two in ten-pin bowling, to knock over a set of 10 pins. If a bowler knocks down all 10 pins with their first roll in a frame, it is scored as a strike. If all the pins are knocked down in two rolls, the bowler has made a spare. If all the pins are knocked down in three rolls, it is scored as a ten, as in candlepins, with no bonus. If pins are still standing after the third ball, the bowler gets one point for each pin knocked down.
A Duckpin bowling ball

The origin of the sport is a subject of some debate. One possible origin is that duckpin bowling began in Baltimore around 1900, at a bowling, billiards and pool hall owned by future baseball Hall of Famers John McGraw and Wilbert Robinson, both of the then Baltimore Orioles.

However, according to a 2005 baseball book by Howard W. Rosenberg (Cap Anson 3: Muggsy John McGraw and the Tricksters: Baseball’s Fun Age of Rule Bending), an article from May 1894 in the Lowell Sun confirms the existence of duckpins. Rosenberg traced the story of crediting the origins of duckpins to McGraw and Robinson as far back as Shirley Povich of The Washington Post in the late 1930s. Rosenberg in 2014 came across a new earliest such claim, in the Pittsburgh Press of March 3, 1929.[5]

Possibly the earliest book to shed light on the whopper is Florence E. Greenleaf’s (as told to Paul C. Tedford) 1981 The Game of Candlepin Bowling. In the main text of the book, Greenleaf credits McGraw and Robinson with originating the sport, and her source is Frank G. Menke’s Encyclopedia of Sports, the 1978 edition of which indeed contains that superlative. However, at least in the version of the book that is in the permanent collection of the Library of Congress, Rosenberg discovered in 2013 that there is a “Corrections since publication” page near the end, pasted in, and Correction 1 states, “Duckpins were bowled as early as the 1890s in Lowell, MA. [sic] area (more research is necessary)[.]”

Then, in 1985, a 130-plus-page publication called Duckpins: The Tenth Frame cited related Lowell, Mass., coverage of duckpin bowling in May 1894. Writing in that publication, Bob Tkacz, of Newington, Connecticut, noted finding articles showing that a duckpin tournament was being held in Lowell at that time. Besides the rarity of the 1981 candlepin bowling book in U.S. libraries, the 1985 publication is not readily available at all in U.S. libraries, which explains why anyone looking to refute duckpin bowling’s Baltimore origins would have a tough time competing with a claim in such a widely distributed book as Menke’s Encyclopedia of Sports, which has undergone many printings (although the duckpins origin whopper was added subsequent to that book’s first edition being published in 1944).

Articles can be found in the Boston Globe earlier than May 1894 — the newspaper itself being founded in 1872 — showing the existence of the sport around Boston. According to Rosenberg, the earliest Globe reference to duckpins was on January 2, 1893.

Rosenberg’s book methodically accounted for Baltimore newspaper reporting in late 1899 and early 1900, when duckpin bowling suddenly appeared in Baltimore. The Baltimore Sun of December 28, 1899, said that at the McGraw-Robinson bowling, billiards and pool hall the night before, the facility’s manager had introduced duckpins. The Sun did not cast the introduction as nationally significant. A possible explanation for the introduction is that Robinson is a native of Massachusetts.

In 1982, the Women’s National Duckpin Association was formed to give women a venue to compete in duckpins at a professional level. The organization conducts several tournaments yearly in New England and the Mid-Atlantic. The final tournament each year is called the Grand Prix.[6]

The origin of candlepin bowling (which shares many similarities to duckpin, including a smaller ball and three bowls to clear all the pins) has also been traced to New England; in particular, to the Massachusetts city of Worcester in 1880.
Variants

In 1905 a variant called rubber band duckpins was introduced in the Pittsburgh, Pennsylvania area by William Wuerthele,[7] in which the pins are circled with hard rubber bands to increase action and scoring. Wuerthele observed bowlers wasting their third ball as well as flying pins injuring pin boys, so, according to a defunct publication called “The Ducks”, Wuerthele added the rubber band to increase scoring. The American Duckpin Congress was formed in the 1920s to govern the game of rubber band duckpins. The organization later became the American Rubber Band Duckpin Bowling Congress in 1945 and became an affiliate of the National Duckpin Bowling Congress. The rubber band game is now almost extinct, with most of the lanes located in private clubs. Rubber band duckpin is the only version of duckpin played in the province of Quebec, where it has retained a certain degree of popularity. The rubber band game is also played in at least one dual tenpin/duckpin bowling centre in Markham, Ontario. A family entertainment center and resort in Hayden, Idaho offers two lanes of rubber band duckpins alongside its normal tenpin facility. Bowlers tend to throw slowly with their fingers facing forward to give the ball backspin. There have been perfect games bowled in rubber band duckpin, including the largest duckpin prize ever won on television, C$50,000 in 1994.[8] Since it is easier to knock down pins in rubber band duckpin, its rules are identical to those of standard ten-pin bowling.